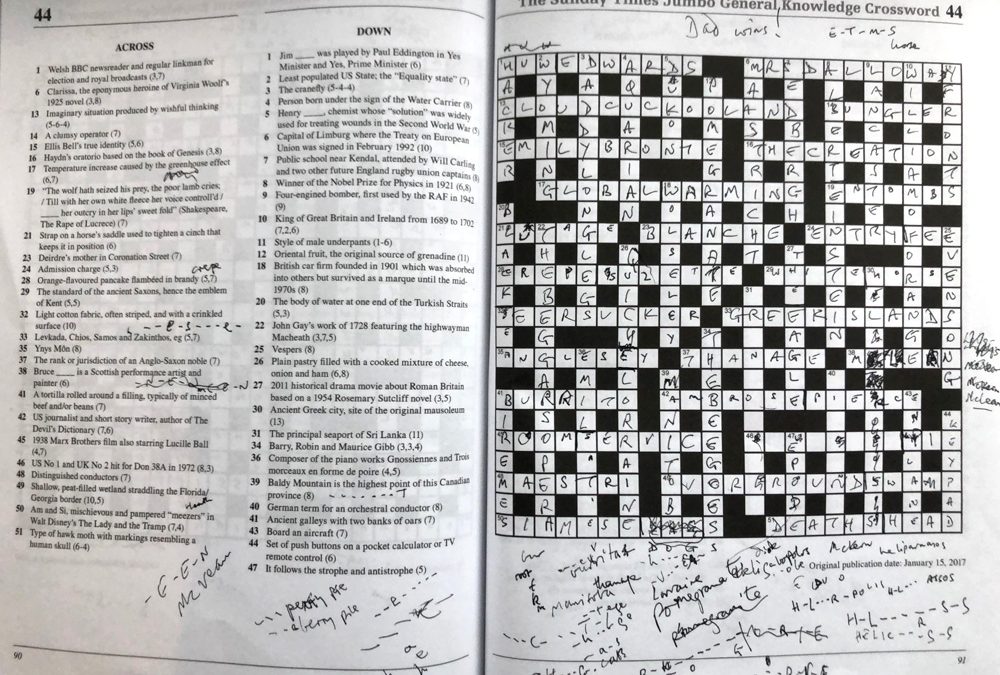 Three weeks ago it was over but the memory can still flare up of a protracted, nightmarish encounter. My elder son and I are intrinsically competitive and when we take each other on, with the best spirit in the world, it can be tough going. He’s recently taken over as numero uno in table-tennis, after a long spell (merely his lifetime) of domination on my part. Before lockdown we would often meet in a pub for breakfast and a two-or-three-hour session on the Times puzzles: Quintagram, Sudoku, KenKen, Concise Crossword, Polygon and the Daily Quiz, interlaced with Brexit chat and generally setting the world to rights. Occasionally on a Sunday we’d take on the Sunday Times Jumbo GK. And then, with lockdown upon us, he threw down the gauntlet of gauntlets, or at least pushed it through my door: a book of fifty of the same.

So began a marathon of marathons. Over the next six weeks or so we did the lot, going over each one by phone. We worked out the rules as we went, for example that with a person’s name of more than one word you get half a point for half the full answer, a third for a third . . . you can imagine the legalistic niceties in other instances. Which I may say we enjoyed grinding out in a kind of detailed constitutional discussion. What was bewildering was how close we were in the results.

With fifty to sixty clues in each grid incredibly we drew the first two, and ended up with the boy (in his fifties) the victor by two puzzles overall. Each of us suffered agonies over words at the back of the mind (of course we looked up nothing while solving); each of us made inspired guesses or had infuriating mind-freezes. I still can’t believe I didn’t get Amontillado having had it to hand as a tipple virtually for ever. He was hot on what I grouchily referred to as the bandwagon of popular music and film, I was the more likely to dig out a classical or literary reference; but either would on occasion triumph with a lucky guess in the other’s area, where the “expert” had a blank space. And still a jumble of miniature successes and failures crashes through the mind, if one lets it, and one thinks: never again.

In the pictured puzzle I was relieved to get Crepe Suzette and Quiche Lorraine, as he generally runs away with the foods. I was convinced of Ambrose Pierce,  forgetting it was Bierce: only a half. He put together Halicarnassus – my area, and I was stumped! – and hovering between emplane and enplane he reasoned aright and I wrong (as soon as I knew the n was wrong, of course, I couldn’t believe I’d gone for it). American Pie drove me mad: I kept running the tune of the sung name through my head but was looking for a three-syllable first word and ended up only with Pie, scoring zilch. Elsewhere though I was more on song and won this particular one overall. Now, recovering GK-Jumbo-holics both, we are limited to a single puzzle when it comes out on Sunday each week. We give ourselves only an hour (with the book we had unlimited time for each for a day or so). We discuss the results by phone and that’s it. Each is trying to forget the compulsive agony of the binge of the past. Never again.

Except that the other day he shoved another collection of the same through the door, 50 more snapping turtles. The internet says these animals may attack if humans interact with them. Neither of us can look the first one in the eye yet – but we know a six-weeks bender’s on its way. We’re in for a mauling – it’s my turn to win – bring it on!