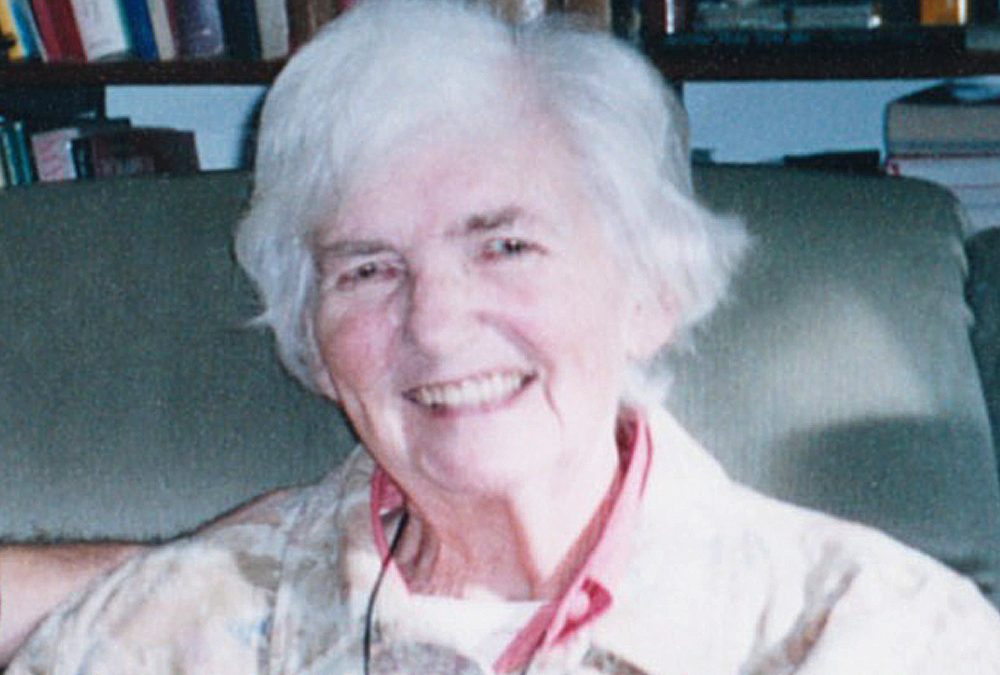 Sixteen years ago she passed away. Just the other day I was talking to my brother on the phone, her other child. She had no daughters. And yet she did, a bevy of them far and near, younger women for whom, behind the scenes, I think she offered a mother’s touch. I hadn’t realised this until this moment of writing. She was a good friend to any number of people, women and men of any age, and naturally to children. She may have been a mother-figure in a way to some of the men as well. But looking back I see she was able to give something especially to younger women. Perhaps beyond her ability to listen and understand it was an alliance, a matter of simply being there in a shared concern. It was a gift the more telling in that she had not known any kind of a mother herself.

It is a mark of her bravery that she turned something bad into something good. She had had an exceptionally turbulent and traumatic childhood and launched out on her own into an independent young adulthood which led to a somewhat rocky road. She made it work. She earned a living as a textiles journalist and in her middle age, her two sons grown, plunged into the burgeoning women’s movement and became a well-known figure in it, especially towards the end of her life. Her book ‘In a Chariot Drawn by Lions’ was and is used widely as a resource by those who wish to explore the historical figure of Wisdom as the female aspect of divinity. She published a store of articles in the same broad area. Her life had expanded: yet she was never the kind of scholar who got in the way of who she really was. She had always been a practical person. She had also always been a poet.

Her other published book, a volume of poetry called ‘Athene Revisited’ and dedicated to the furies, is less known and deserves to be more so. I have been reading it on and off all day. There’s a poem, ‘Full Moon in Malta’, which after seeing the moon as boat at night and globe fruit at dawn bursting into sunlight, plunges into the darkness of the doubt of day, with so much subject to ‘human despoilers’. Finally the day, too, takes her by surprise:

As I walked the grey road in the afternoon dusk
Seeing a patchy field, where wild daisies danced in thorns and stones
And a group of goats backed down to harbour,
In the green folds of the thin grass
Suddenly, another fruit, another boat, another pattern,
Suddenly whole groups, among the grass and the thistles and the wild clover
Suddenly in the singing evening, as the first star climbed upwards
Suddenly in the dusty road, bending mildly towards me
In the damp evening,
Suddenly I saw, looked again and saw
The merciful corn.

My mother lifted people. She was a part of the undying world of clarity and common-sense and hope – and vision. She had tremendous strength. She was a great soul. My brother and I have not always seen eye to eye but in our different ways we are glad of what she gave us, and know we are more than privileged. The next time we chat on the phone – we’re in different countries – I dare say some recognition of that will pass between us, a flicker of that flame. Though always far more is unsaid than said, it usually does.