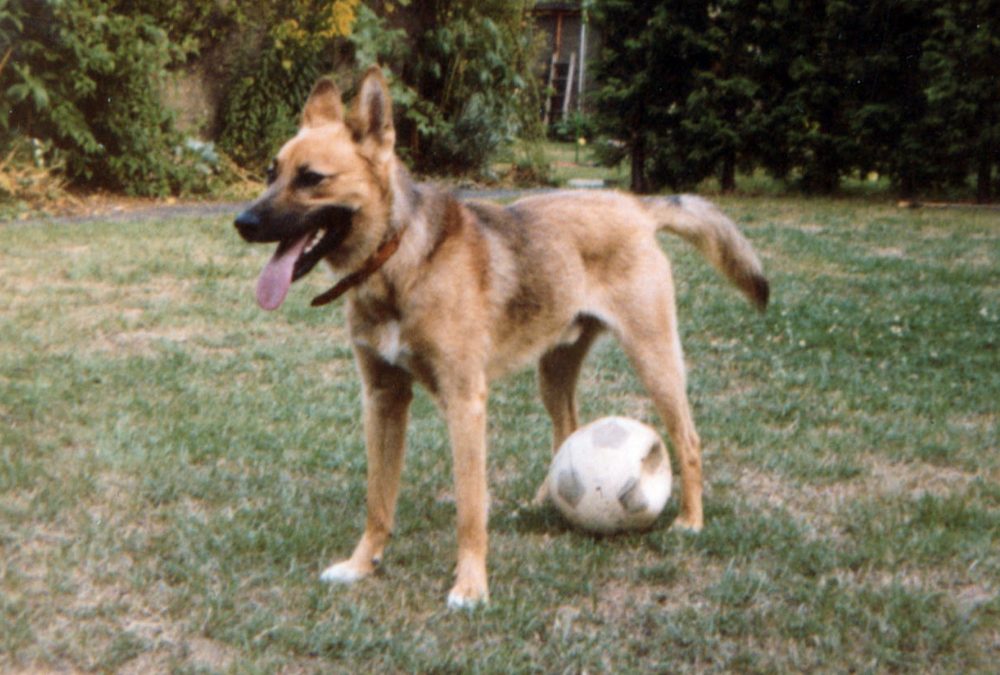 We got him from an animal rescue centre, a lively-looking character about a year old who, we were told, was a tad nervous. Apparently he had been kept on a chain for many months in a yard, barking intermittently, till the neighbours called in the authorities. The first day he was with us the four of us sat down after lunch and resolved not to get up till we had a name. It took about two hours. Finally someone brought up the idea of a street musician and there it was: Busker.

The first weekend I got up early to add a bit of wire fencing to the garden wall as he was getting over it too easily into the adjoining garden. As I perched on a step-ladder I felt a lick on my cheek; he’d just cantered along the wall-top. I felt accepted.

He wasn’t easy to train. I never achieved the obedience needed for his proper safety. The one whom he most listened to was our ten-year-old younger son, which pleased the lad mightily. Busker could be difficult: he often growled menacingly at bigger dogs as if spoiling for a fight. He got into one once with a huge animal who in a trice had him on his back with his neck threatened by a massive gaping jaw. I thought he was done for but the victor merely drew a tiny drop of blood from the throat, teaching him a lesson with an exact precision. He still played merry heaven for years.

He was acutely attuned to the sound of the letter d. This was because we would ask him, “Do you want to go for a walk?” which soon shortened into ‘Do – ?” Then we saw he would begin to respond to any d that he heard in the words yattering on about him. He was a deeply loyal animal and tremendous fun.

In recent nights he’s appeared in my dreams. Three or four times it’s been the same thing in different contexts: he hasn’t been fed for many days, I’ve neglected to buy him food, he’s thinning away almost before my eyes. Why I can’t get him the food I don’t know but there’s always some undramatic hold-up: I just don’t seem to be doing it. In one dream he actually indicated the place on the shelf where the tin of dog-food should be, pointing his nose or even perhaps gesturing with his paw. There’s a sadness about him he never had in life. Why should it be? What does he stand for in an inner register of something I haven’t done, something I should have done? Yet even now I remember as if it were yesterday, that loping along the top of the wall unseen, and a sudden lick on the cheek.