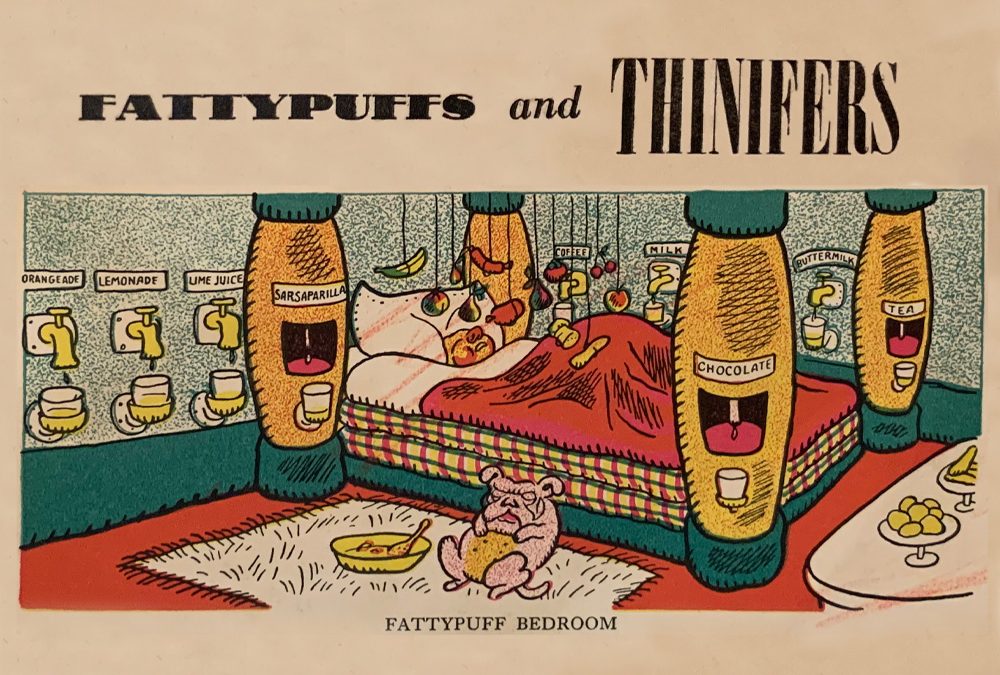 It was my first book and I would still say it is my favourite one. An old friend of the family gave it me when I was two or three, probably just after the end of the War. And war is what it’s about, war and peace, though on a somewhat less searing level than Tolstoy’s epic. For me it was about the wonderful pictures of the worlds of thin people and fat people.

It’s still in remarkably good shape, with its old faded green binding and all the pages in place. Written by André Maurois in 1930 (under the title ‘Patapoufs et Filifers’) and translated and brought out in Great Britain in 1941, it kept the original imaginative artwork by Jean Bruller, without which it’s scarcely more than an adventurous yarn. But those illustrations have kept the heart of a child alive in at least one old sourpuss up and down the rollercoaster of the post-War world.

There are pictures of two brothers and their parents, mother and Edmond on the plump side, father and Terry anything but – it’s all gloriously incorrect by modern standards. The boys scramble up a couple of facing rocks and drop down between them to find a moving staircase rumbling down into the Earth. At the bottom they’re separated by guards and for months don’t see each other, as they’re made to live in two size-ist subterranean countries, in which everything’s either sharp and pointed (including birds and beasts, even coastline), or rounded and somehow genially comfortable. You can’t help warming to the Fattypuffs, unhurried as they are and fond of food. The picture of a typical Fattypuff bed made me vow to find one or make one like that when I grew up. (The Thinifer bed pitches you into a narrow basin of cold water at 5 a.m.)

The war’s about the name of the island in the middle of the sea that parts the two countries. Is it to be Thinipuff or Fattyfer? Eventually of course the frighteningly energetic Thinifers prevail over their easygoing opponents . . . but come the peace, the warmer disposition of the losers gradually engages the others, whose eyes begin to be opened . . . so that after a time neither comes out on top nor needs to. Hybrid buildings and buses are born, strange weddings take place . . . life is shared even as visible characteristics stay distinct. Oh, and the name of the island? Someone suggests ‘Peachblossom Island’ and the problem’s solved.

When the boys ascend the staircase, after ten months away, and scramble up between the rocks, they’re amazed to see their father standing nearby and no more than a trifle impatient. The final sentence has always made excellent sense so far as I’m concerned, though I understand it as little now as when it was first read to me.

‘The fact is that in the kingdoms of the Underground, where there is neither sun nor moon, time goes exactly seven thousand times faster than it does on the Surface.’