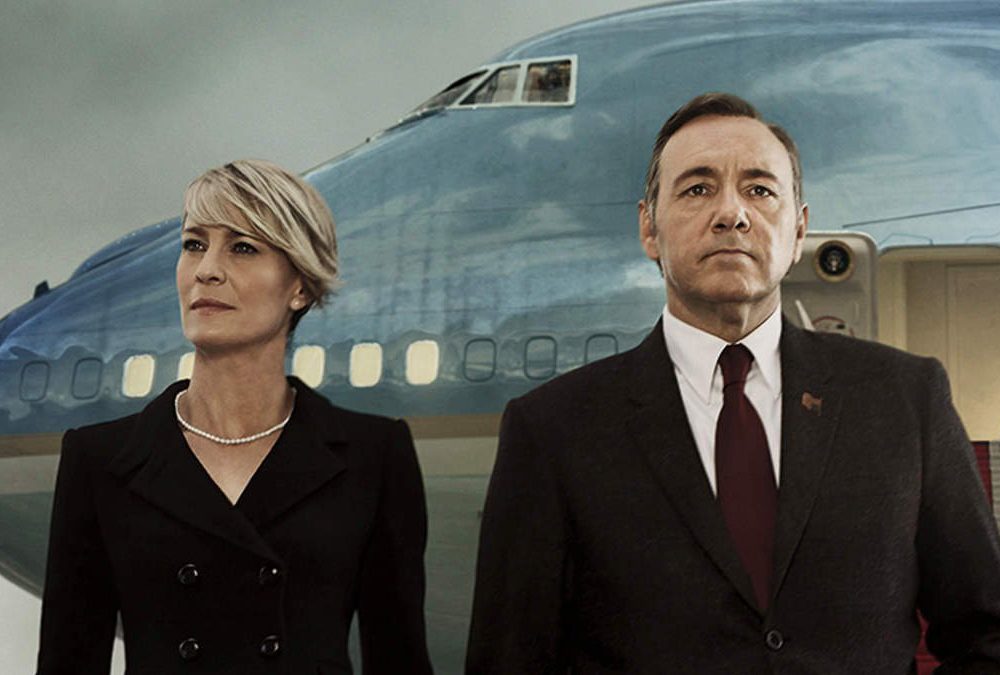 Blimey. An unAmerican expression perhaps but after watching the full 73 episodes of my latest Netflix blow-out – Suits and Breaking Bad went before – I need to remind myself I wasn’t, er, born in the USA. I’ve been riveted by all three – I’m almost grateful to lockdown that I stumbled into the genre. But the pace of it all is crazy. On my one trip to the actual region I found pretty well everyone calm and sane and even considerate; and yet there’s always an underlying sense of things going too fast, somehow, a sense which may be reflected in their film. Perhaps it’s not who Americans are but how they see themselves.

Frank and Claire Underwood, a married couple who become successive Presidents, hurtle through international crises and a kind of quick-change dance of cut-throat politics at home, to provide almost unforgettable portraits of what may be called survivor’s power. And ‘cut-throat’ is hardly metaphorical. At one point during Frank’s term a crowd is baying, “Blunderwood! Blunderwood!” and at every session following I bawled “Blood and Thunderward” at the television before turning it on. But I loved it all. One or two of the minor characters in particular were a treat and Doug Stamper an immortal.

But the producers missed a trick. When Frank dies and Claire is elevated from the Vice-Presidency, I was seething at how she was hectored, interrupted and patronised by all the male politicos around her. (I’ve long been of the view that men should be excluded from the politics of the world.) And so I was delighted when out of the blue Claire dismissed her Cabinet wholesale, appointed a new one and suddenly was at the head of a long table at which sat twenty or so women – and no man. Now – in spite of more than a sprinkling of the Lady Macbeth element – we would see a different reaction in Dr Strangelove’s laboratory. By which I mean, in however nefarious a plot-line, the world of rivalries at least for a scene or two might yield up a glimpse of a new construct, where (to put it bluntly) people didn’t simply talk each other down.

Not a bit of it. The producers set it up and forgot what they were after. I suppose the most exciting thing in building a house of cards is when it topples, not when it stays up, at least in filmic terms. I shall remember the series for its underlying savagery, but also for a number of moments of individual pathos, and a moving portrayal of an unusual marriage. But most of all I shall remember it for a moment that didn’t happen.