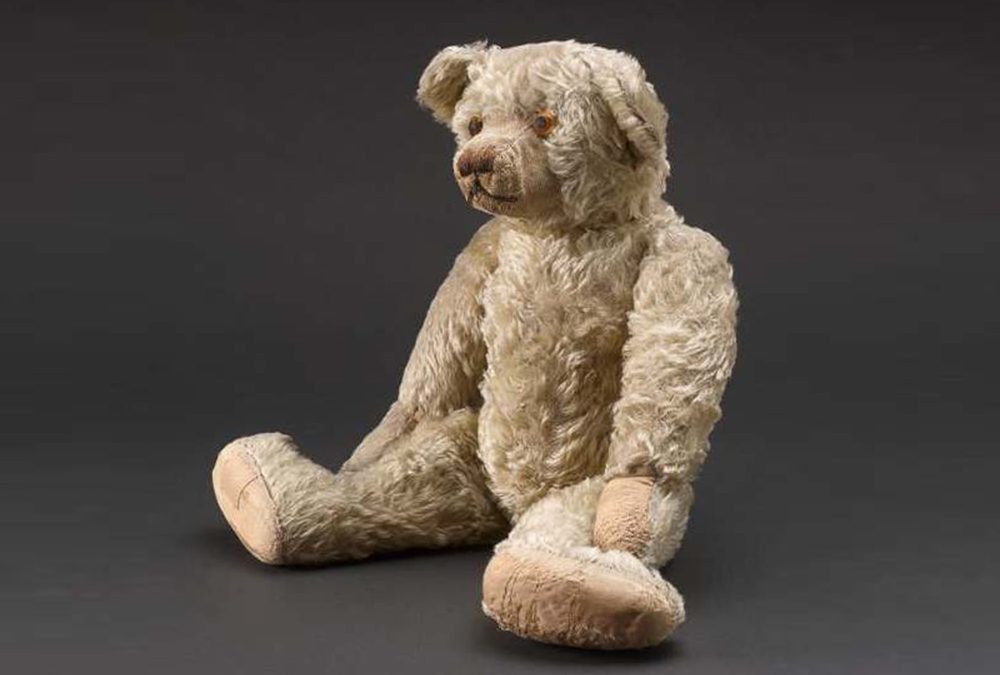 In Ashdown Forest, two days after the centenary of the first birthday of Christopher Robin Milne, at which he was presented with a certain Bear. The house where this happened is nearby and I can see the Poohsticks Bridge and some of the legendary stories almost taking place in the Hundred Acre Wood. I am here by coincidence, I hasten to add: I arranged the visit with no thought of the Milne connection or knowledge of the anniversary, but merely to meet a friend in a nearby village. Yet informed by the friend of the one and by the ‘Times’ of the other, and venturing upon the scene, I find myself taken back into my own childhood as far as I can go.

There are two or three fluffy animal-toys. Next is a large humming-top. Then I think books took over. The animal-toys – I have no idea of what genus but a bear does not come to mind – are the earliest things I remember. What are these companions? Do dolls (for that is what they are) assist the first steps to independence, with their tangible contours of identity? Is there a kind of infantile taking-charge? Or are they simply the first and only friends over whom we get our way, call all the shots? Whatever their first cause so to speak, what is remarkable is their sheer presence, as well in so many cases as their staying-power.

One of my children had to have to hand both Sam Teddy and Lamb Teddy (don’t ask, I can’t remember). Fortunately for his exhausted parents that didn’t last too long. On the other hand my fifteen-year-old grand-daughter, one of the most sensible people I’ve known, still likes to know where Eddy (the teddy) is, if not quite as attached as she used to be. He must be all of thirteen or fourteen years old. Maybe it’s that he doesn’t change. Certainly Winnie-the-Pooh and his friends don’t.

I relate to the Bear of Very Little Brain, to whom hums (verses, songs, poems) happen to come along. But even more to the donkey Eeyore, whose lugubrious remarks simply set the bar for umbrage, as if it were a herb he personally fed on. So here I am in a land of make-believe, than which nothing could be more real in the afternoon sunlight. Always the two worlds; and always, too, the glimpse of a smattering of contentment, however long ago it was that we abandoned our first creature comforts.​