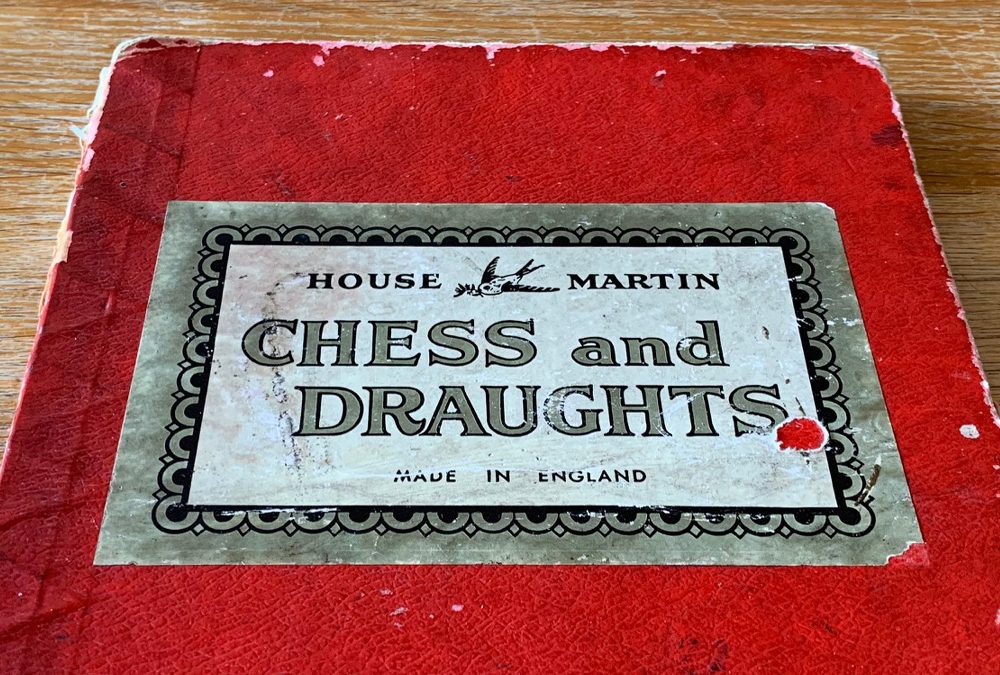 It’s been with me a fair old time now, a knowing silent companion to my competitive niggle and lack of savvy in getting things done. Back in the day, when I was about 16, my sudden notoriety as chess secretary gave rise to a Votes for Chessmen campaign in a school mock General Election. Black-and-white-squared designs began to appear on posters, and asked for a slogan I came up with some doggerel instead:

The campaign soon petered out but my attachment to the game has never quite left me, though I play rarely enough these days. Yet even at school I lagged behind in one essential aspect: learning the theory. Openings and end-game in particular demand some work behind the scenes, but I have always preferred to play by instinct. Looking at the old miniature battle-field now I feel a pang of guilt. It’s been with me all these days, it has hosted any number of glorious struggles … but perhaps it was due a little more expertise.

I took it with me to India where I lived in Kolkata for over a decade and unfolded it time and again on a table in the garden of the Fairlawn Hotel in Sudder Street, where I would go of an evening to drink gaseous beer. Between the honking of crows (one flapped down once onto the table next to me to snatch a crumb and upset someone’s drink) and the raucous beeps of cars, I and a friend would play our hearts out as day turned to sudden night and the world fell away. Back in England I lost the board for a time – it had been picked up by someone at a school chess club I ran – and I made a passionate plea in an assembly for its return. What was it worth to anyone else? Whereas for me its marks of age were scars of battle, Victoria Crosses, win or lose. I was ridiculously delighted when it was anonymously returned.

As an author too I have lacked savvy. The background work needed to enable publication, or to consolidate what of that there has been, has not matched the need. But I have written my books, as I have played my games, following hunches, invisible patterns, watching combinations settle in front of me out of thin air. Words are my pieces of thought, and if I have not played the game to my and their best advantage in the public arena, at least where it most truly matters, I hope to have handled them more as they deserved. Seen or not, the finished poem on the sheet of paper, where the opposition has only been myself, has not lost the battle, nor when I go, the war. In some sense it will stand.

And what a time I’ve had, letting those delightful patterns compose themselves. Short struggles, long struggles, much rejected and lost, but every now and then a fluent passage of play finding its way. It is really a battle with Time itself then that is not lost.

And so my temporary self looks at a battered old acquaintance with a click of understanding. At once it seems to tell me off for overthinking my position. I see no more than a much-used, even treasured, somewhat ancient House Martin chess and draughts board.