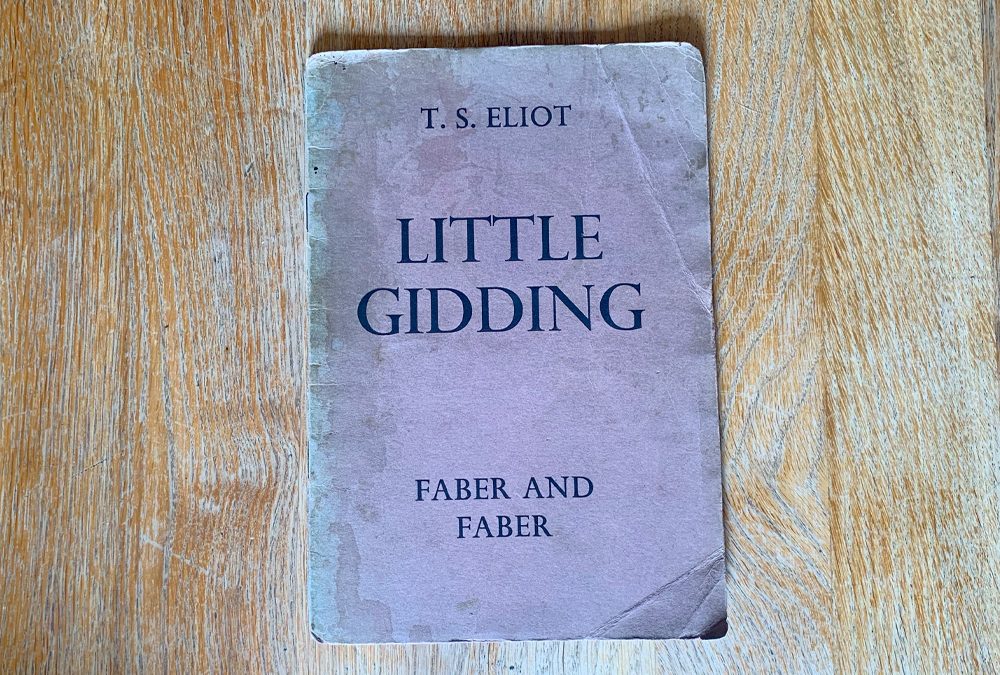 ‘Midwinter spring is its own season’ begins T.S. Eliot’s ‘Little Gidding’, the final canto of his meditative epiphany ‘Four Quartets’. Like a great stained window the poem in its entirety casts light on who we are, in religio-existentialist terms, and will do for many an age. In hock to a certain intellectuality it sheds a narrow ray, but one perfectly loaded, as it has always appeared to me, with the full spectrum.

I’m at the remote Cambridgeshire village. In the church are a few wall-hangings, finely-stitched sampler-style, of quotations from Eliot, Nicholas Ferrar, an early-17th-century clergyman who founded a community at Little Gidding, and the poet and priest George Herbert who was Ferrar’s friend. All round the church in the evening as I write are birds and dark trees and the solitary companionable aspect of Nature at its finest . . . I have nothing to say.

I came here to be here for a moment, taking a mini-break, as the lightening of the rules allows, from the dreary parochial lockdown that went on so long. On my way I realised the opening line to Eliot’s final section (above) can be taken to speak for this very time of emergence from the plague. It has its own character, balanced ‘between pole and tropic’ as the poem has it. (Never mind we’re almost at midsummer day.) I hope Eliot’s shade will forgive me if I congratulate Ol’ Possum for an unintentional deepening of the status of a certain kind of economist or game theorist. The term ‘zero sum’ was first used in 1944 yet here he is, in a poem first published in 1942, looking out from the ‘midwinter spring’ of the spirit to ask, ‘Where is the summer, the unimaginable / Zero summer?’

I should be banned from commentary forthwith. But I did come here for a reason. I have a copy of the first edition of the Faber and Faber pamphlet. Inside it is inscribed by my father on gifting it to my mother, ‘New Year 1943’, at which point I was about three months from being born. They split up before my birth but it is a precious memento of a closeness. So I came out here to Little Gidding, with a wonderful poem in tow, and a few disjointed thoughts somewhere between the sacred and the profane, and here I sit for a moment at the centre of an inner web, with a visit made to God knows where . . .