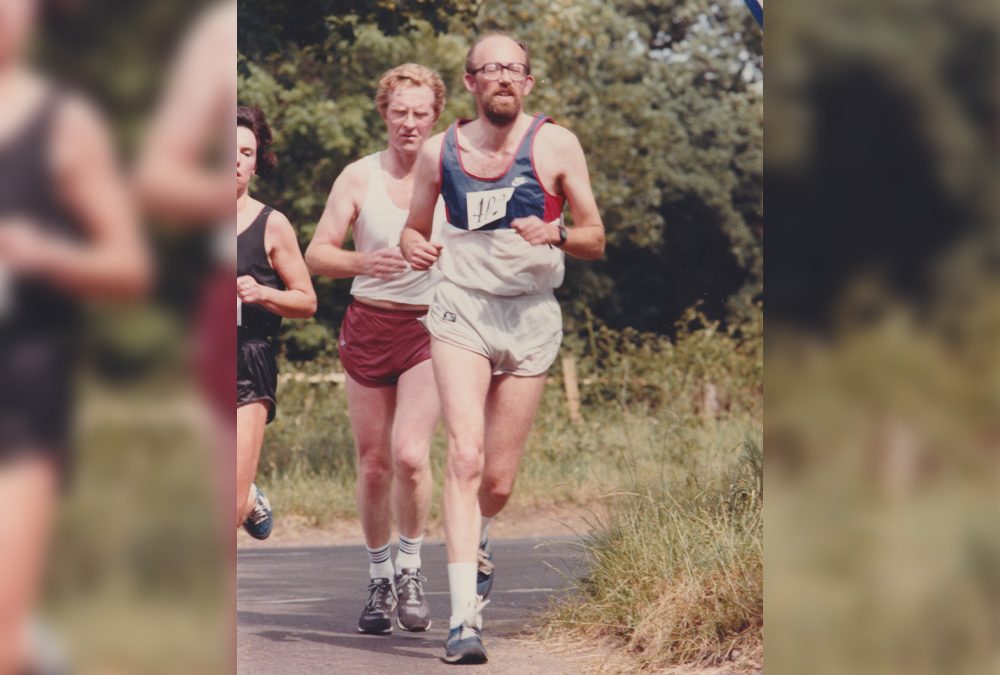 A photo was unearthed recently by a family member that took me back to my running days. So here I am leading a small pack – no doubt well down the field – in a half-marathon in 1984. I tend to think of myself as ageing at a respectably slow rate, but am somewhat discombobulated by this youngster who could clearly walk as fast as I can run now. There’s nothing like the reality check of a 37-year time-warp.

It brings it back though, the bundling along, the trudging up hills, the trundling down them, travelling in the moment. The divorce from all other concerns. The short-term goal – to finish – refined only by – in a good time. (Winning or a high place was not an option.) The body hard at work yet of a piece. The being outside.

That year I ran my only marathon. All this time later it wraps itself around me, a python that tightened and tightened, till at last I was home free and let myself fall on the grass. The constriction thrown off I lay there liberated, inert, somewhere I have not been before or since. Eventually I returned to a shambling verisimilitude of the bipedal mode.

Many moments remain from that 26-mile canter but one stands out. A mile or so from the end yet another hill appeared and I found myself walking for the first time. Someone drew level, also dropped to a walk, and we started talking. “Helluva place to put a hill,” I grunted. He replied with a drawn-out thought which I interrupted by simply running off. I count it as one of the rudest things I’ve done (and I have form as a social offender) – but I knew if I didn’t, I’d be walking to the end. As it was I managed a time I can look back on without too much of a shudder.

Another memory is of a shorter conversation, about the shortest possible. Once I went for a training-run in the snow, which turned into a near-blizzard. I made out another runner coming towards me. As we passed we both shouted out, ”You’re mad!” and then were lost to each other. (Strangely, as I write I feel that moment too around me.)

A spell of long-distance running leaves its own memories. One I’d rather not have is of my children more than once over-hearing me, when I thought I was on my own, muttering something like, “ . . . if I can get to that lamp-post in under 28 and Tibbet’s Corner in 35 and go slap-bang down the hill then surely I can . . .” muffled sniggers. One gets obsessed. Once at a party I met two other runners and we simply talked times and training for two hours or so, all I’m sure hating ourselves for it yet unable to tear ourselves away and actually talk about something more interesting with someone more interesting . . .