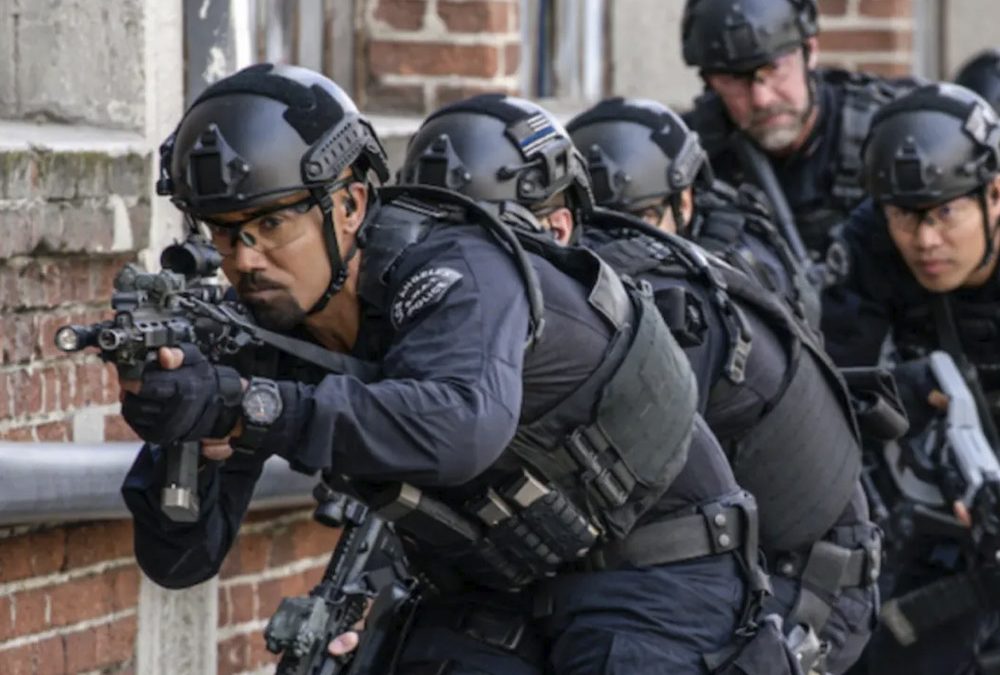 It doesn’t take long for the Special Weapons and Tactics unt of the Los Angeles Police Department to tamper with the heartstrings just a little. This screen-cop outfit that day after day (it seems) keeps the master criminal mind at bay in L.A. quickly becomes our ally, somehow, or we become its: so we do the good work together, all miraculously unscathed. Two questions in passing – why are the bad guys always such lousy shots? And why aren’t females more often handed that evil-spider role, that Moriarty intelligence? Crime fiction has some way to go. Anyway this central SWAT team of a half-dozen or so quickly allow us into their back-yard of aspirations and failures, their triumphs and tragedies – even if they are too busy to take note of ours. And so we live their manic headlong life with them, almost one of the family.

The team is a family of its own. In action everyone has everyone’s “six” (o’clock, their back) while at the same time living out a quite subtle interplay of meta-familial roles. Sibling-type rivalries, authority figures offering “tough love”, the whole family web is there, the web we carry with us (however torn or broken) all our days, the web by which to a degree we understand the world. That the SWAT team is a family (and so survives) is an underlying motif that goes deep.

A pervading surface theme is the different perceptions of black and white people of the tensions so deeply lodged as to be almost embalmed in colour difference. At one point a desperately urgent discussion between the (black) leader of the group, and his (white) deputy who was in line for the job but denied it by a technicality, examines this theme at some length, while bullets flail around them. Normally training kicks in and they take cover but in this case there’s no time even for that. Such impractical earnestness however is an anomaly and in general a light touch rules; and the black/white theme is handled as a result with a telling force. Another surface theme is simply that of leadership; and another, linked to that, is the path that has to be forged in every individual case by the strong woman.

The main theme, however, less explicit and more pervading than any of these, and which hands SWAT its Oscar in a way, might be said to be the difficulty of good love. I am not at all sure this was a conscious thought in the minds of the film-makers. After all, in an ephemeral series chock-full of action and made above all for entertainment, we are hardly intended to listen to a sermon. Except that this particular aspect of reality, in some guise or other, is likely to enter every form of literature that lasts. And so something from my latest wild Netflix escapade will last for me.

Whether it’s in a romantic context, or one between mother and son, or son and father (how often the American screen trembles with a father-son clashing of gears and at last an easing-forward); or whether the issue lies between cultural siblings or cultural opposites, what stays is the hard road to love.