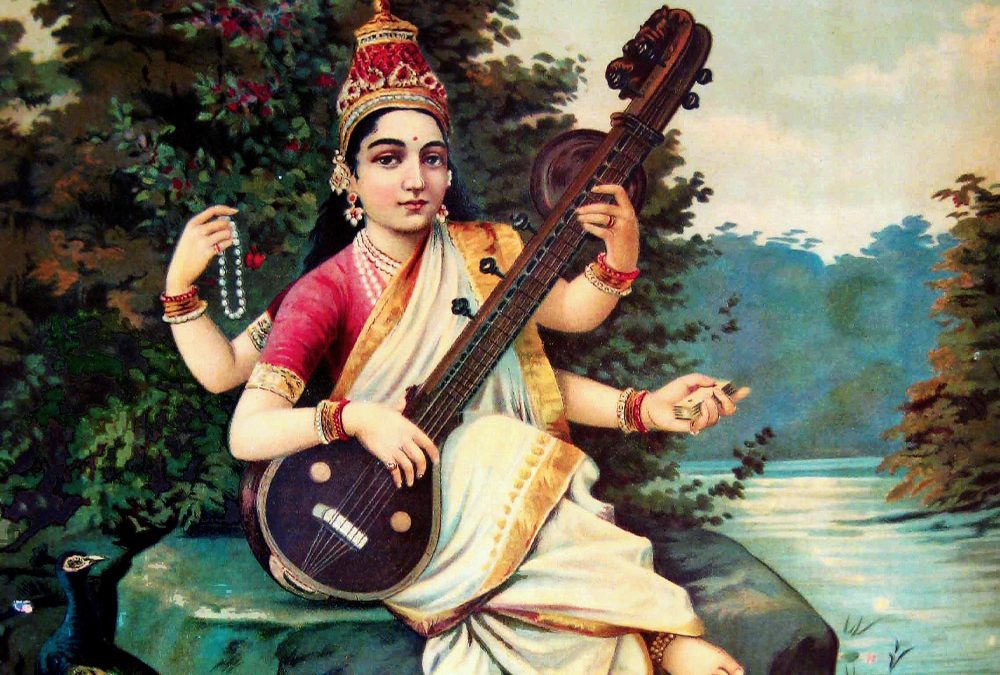 She is the Hindu goddess of knowledge and learning, of music and the arts, of the graces of the mind. Pronounced (by Bengalis) something like Shoro-shoti (short o’s, soft t) her name means ‘She of the drift of waters’ and concurrently ‘She who has speech’. The two together can almost mean poetry, as I choose to take it. At any rate there are times when I can feel under her wing.

She arrives (at wherever she is, say in a temporary temple or pandal put up during a festival) on a swan, which nestles by her, and she plays the veena, the ancient stringed instrument of India. That is where I became aware of her presence in the background, and never more tellingly than once when I was visiting a primary school in a village. A small field lay next to the school and at its centre was a small hut. When I asked its purpose I was told it was where children went alone to pray to Saraswati before their first reading lesson. The field and hut had no other use.

Education is valued in India as the privilege it is. On the goddess’s special day (in January or early February) there may well be a small pile of books by her image (which will be everywhere). Perhaps it will include a dictionary. There will be a lotus and a priest will say prayers, and members of the public at a pandal or of a private household at an indoor shrine will join in. Saraswati is also the name of a river of ancient India (long since dried up), and I sense a river’s rippling movement somewhere at the heart of the educational ideal, however much at variance that may appear with the practice. In all schools in all countries a certain rigidity can as it were over-announce itself. But the goddess is not there for no reason.

In ‘A Room of One’s Own’ Virginia Woolf speaks of “Shakespeare’s sister”. With an identical talent to his could such a one have emerged as he did? Then and now it’s all too much of a man’s world. But who knows what may come about in the future, with a figure like Saraswati at the back of it all?