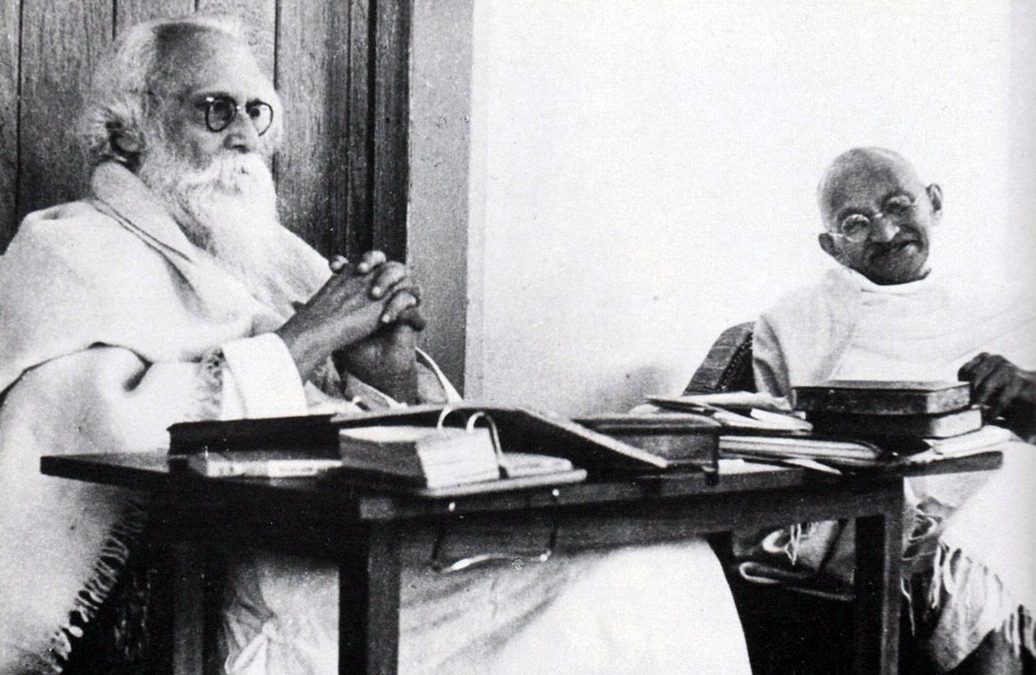 On the public level Rabindranath was at the spear-tip of the force of change. He conducted an almost violent debate with Mohandas Gandhi in articles published up and down India on the outlook to be fostered, as the impetus gathered and drove towards Independence. With the greatest respect, for the last thing either could do was to advance an argument ad hominem, they tore chunks out of each other.

Gandhi was a political leader who could make things happen on the map. Tagore was someone who could scent the direction of things and warn, advise, cry out; he could also intervene to direct effect at times, such as when he renounced his knighthood (awarded by the British) after the massacre of hundreds at Jallianwala Bagh in 1919. Both men had essentially the same free India in mind but Gandhi’s way ahead was always in hock, somehow, to a furious purity of intent. Yet while Tagore was the more practical visionary, Gandhi actually was able – such was his charisma, his sacrifice and force – to achieve a glimmer in his country and beyond of a more harmonious world-existence.

They disagreed on the caste system – while ready to die in protest against the practice and very concept of untouchability, Gandhi saw value in a son’s profession always following that of his father (to avoid a damaging competitiveness). The Mahatma proselytised mightily for all to spin cotton for half an hour a day (to avoid reliance on foreign cloth); Tagore said he preferred to spin poems. And on the cause of the Bihar earthquake of 1934, while Tagore insisted we should not ‘associate ethical principles with cosmic phenomena’, Gandhi told everybody it was ‘divine chastisement’ for the sin of untouchability. Tagore was always aware of the narrowness of the tunnel of a blind religious ardour and the dangers it could bring. But he saw Gandhi truly as a Great Soul (Mahatma) who could and indeed was opening a door to a finer land. While Gandhi saw him as a Sentinel, called him Gurudev (beloved teacher), and valued his opinion at all times to the very depths of his being.

There was a great love between these two men, springing from a companionship of the mind. Together they were a tremendous if as it were a temporarily ill-fitting force: they bore the freedom of a nation on their shoulders that went far beyond the departure of the British. I have an idea the dialogue they initiated is yet to be played out, in their land and beyond. Their closeness was remarkable. At one point Gandhi began a fast unto death in jail in a desperate attempt to force the British government to withdraw a divisive policy. He wrote to Tagore, ‘ . . . I enter the fiery gate at noon. If you can bless the effort, I want it . . . I will yet prize your criticism, if your heart condemns my action . . .’ After a few days, the prisoner now frighteningly weak and the whole of India holding its breath, the British government conceded the immediate point. Tagore had arrived (in poor health himself) with the Mahatma already in dire straits. He was able to welcome the poet and breathed to him, “Sing to me.” Tagore sang one of his Bengali songs. Later that day the concession came through and Gandhi drank some orange juice and survived.