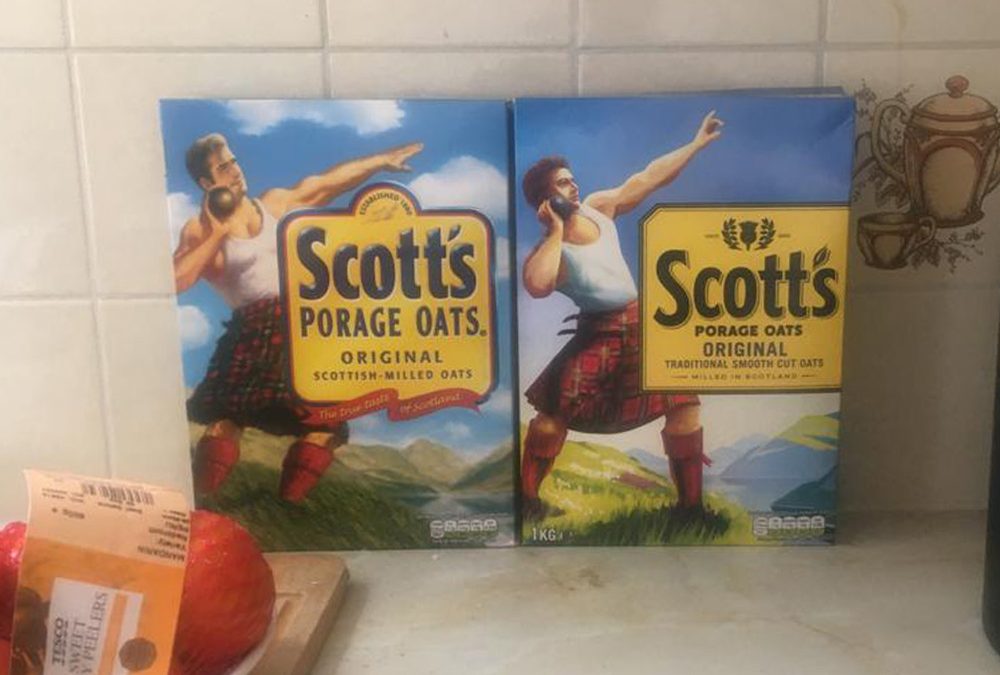 I get tetchier about ads as the years go by. A crashing sea of meaningless disinformation, with any amount of subliminal rolls and twists, even as one imagines oneself unaffected. The science behind it is always being developed, of how to catch people off balance, when they think they have their feet on the ground. I don’t know if a grab can be subtle, but a good ad is a masterly attention-grabber. Literally diverting it captures, so to speak, the direction of your eyes. To think about the increase in the general barrage can be alarming. And yet if I see it as a genre of entertainment, then I simply remember my two favourite ads, irritation turns to admiration, and all’s well with the world.

They are no more than packet-fronts, both from my childhood and both still going strong. One is all about strength and there’s a slightly startling story attached to it. The Scott’s Porage Oats shot-putter recently found himself with a new look, more Rudolph Valentino than John Wayne, and suddenly one is aware of a brooding poseur with an almost visibly muscular right thigh. It’s a scream. Where’s the cheerful guy gone who just picked the thing up and was about to throw it? Fortunately he seems to have returned and now both are available on the shelves. The other packet hosts the immortal Kellogg’s Cornflakes cockerel. The story there’s a lovely one. In the 1920s the Welsh harpist Nancy Richardson visited the Kellogg’s factory in the USA. She played the harp to the nine hundred women who worked there and after a time they started to hum along. The event is said to have lasted all night. In the morning at breakfast William Kellogg said they were looking for a Cornflakes brand image and she suggested a cockerel for which the Welsh is ceiliog (with a hard c). So it ended up, in the colours of the Welsh national flag, for a good old rousing start to the day.

I liked my cereals and I liked their pictures. It’s still a link back. I also liked a roadside ad for Guinness:

Toucans in their nest agree
Guinness is good for you.
Just try one today and see
What one or toucan do.

I was maybe ten years old and appreciated the picture and pun. Television was in its infancy then but now of course on-screen advertising is endless. Yet it too can be a winner. In India there was a marvellous series featuring a young boy and his pug. It laboured up steps behind him, it joined him in musical chairs, in a magic show, in a football game, in being at one with the trees and fields . . . but most enchantingly in my view when the poor lad had to sit for an important family photograph. There he is, scrubbed and serious, and suddenly a look of delight comes over his face as his faithful friend waddles up to him. Hutch Cellular Services were onto something there.

My view is that the ad fad is with us, it’s addictive, it’s invasive, it may be a sight more dangerous than it looks. The more innocent we can keep it the better – and that may well hold for its products too. After all, isn’t the whole idea to appeal to the child in us all?