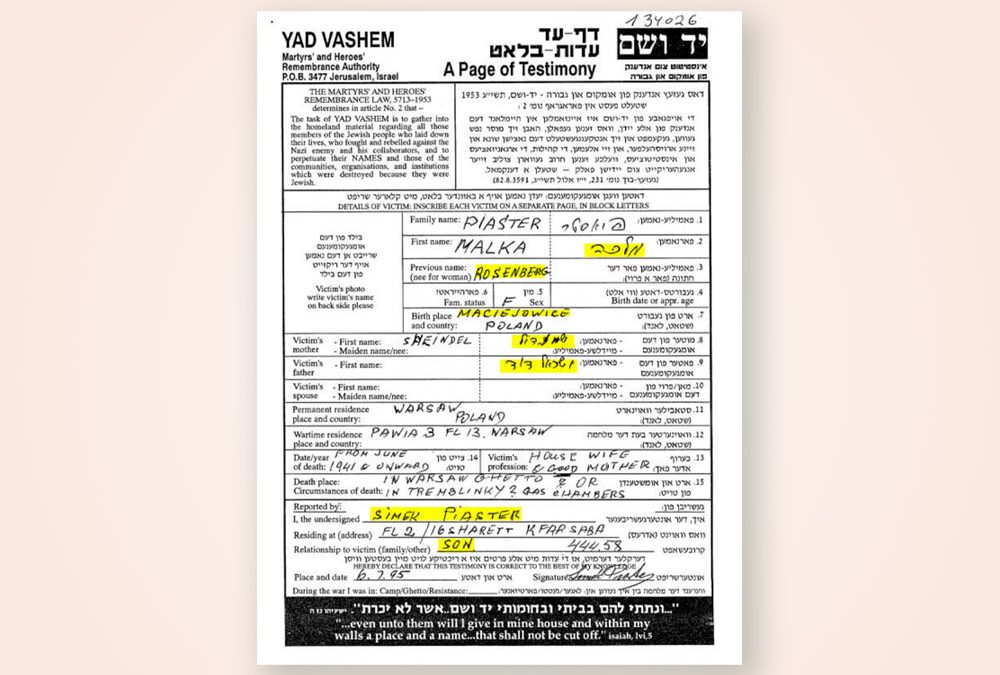 A few years ago I received a bequest from someone I had never heard of. Simek Piaster was born in Warsaw in 1910 and was the only survivor from his family of the Nazi terrors of the Second World War. He managed to escape to the USSR, and from there via a camp in Italy to Australia, where he lived till in his mid-eighties he emigrated to Israel. He never married and was always seeking to establish contact with various far-flung members of the family he had lost. When he died in 2006 he left instructions for an apartment he owned in Israel to be sold and the proceeds to go to such family members as could be traced. He knew of my mother’s elder brother but not of her (or me and my half-brother). She had lost contact with most of her family also and had known nothing of him.

In Israel he completed forms to do with the disappearance of his father and his mother, last heard of some fifty years previously when they had either been disposed of in the Warsaw Ghetto or taken from there to the Treblinka extermination camp. In the form he filled out for his mother (above), under ‘Victim’s Profession’ he writes, ‘House Wife and Good Mother’.

The underlined word says all the world to me.

From a couple of letters he wrote to relatives when he moved to Israel he appears to have been an anxious, sweet old man. He is clearly a goodhearted, energetic, caring person to whom family meant everything, and little family had he had. He fumes at the temerity of the Arabs whose claim on Jerusalem is a mere 1300 years old, compared with that of the Jews which goes back 3000.

Who am I to comment on anyone’s views who has been through such an experience? As with the trauma at India’s partition, still endured by millions, so in the next year the creation of Israel blasted deep into the rockface of history, present and future, for millions on both sides. And so in countless ethno-volcanic upheavals elsewhere.

It is trauma that we must learn to appreciate and find a way to respond to, on the opposed sides of every conflict.

Earlier in my life I had endured a minuscule trauma of my own. Born a Jew (on both sides) I was adopted at a very young age into a Gentile family where I was not at home. Meeting both natural parents in my late teens was a great stroke of fortune and remained so till their deaths and will stay so till I die. Yet I had a false re-introduction to a Jewish being I could at once locate in myself all too clearly and yet not at all. Culturally different I seemed to breathe a different air, not so much from my parents as from the world of certain cousins I met at the same time who did and did not welcome me. I proceeded with something unresolved at core. Nothing could be more trivial, in contrast to my uncle’s deprivation, all that he went through. And yet when I heard from him post mortem and saw a word he had written and underlined on a form, I understood something and was eased at heart.

Thankyou Uncle Simek for my legacy.