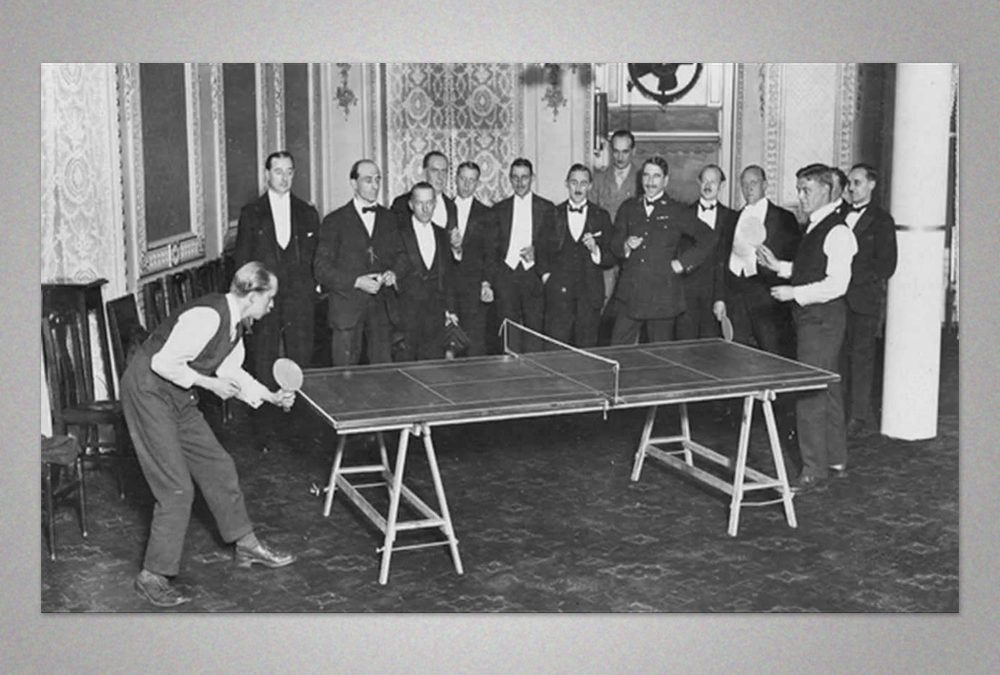 I’m bushed. Boshed. Bashed. An hour’s table-tennis and I know I’ve been in a fight. But you should see the other guy.

He’s my son, a competitive fellow. (See the GK crossword entry of Feb 18.) It was his first game for about eighteen months whereas I’ve managed to get a bit of practice in elsewhere. So a win is a win and I’ll take it, especially against him. I thought I’d given up the numero uno position with grace, not that I’ve done anything with grace that I can remember. But now there’s a chance of reclaiming it, I feel as if I’m standing for all the fathers there have ever been who have fought to maintain position, to delay the handing over the keys of the world to the elder son. To postpone the inevitable.

Table-tennis is an excellent form of adversarial physical immersion where you just hit a ball. The mental pummelling of mind-games is there too behind the scenes as one is always calculating surprise tactics, working on an opponent’s momentary weakness – as it may be, his backhand defence – and above all, keeping an eye on oneself, holding form, driving out the unforced errors. All physical sport has this mental angle, all thought sport has an atavistic shadow of physical struggle. Even Scrabble.

But whiff-whaff, a fine name for the game (though properly without the second h), or gossima as it’s been called, or more usually now ping-pong (though that too is starting to sound dated), as an intense and precise hurly-burly of flailing arms and instinctive blind reactions, is my body-mind sport of choice. Regarding the modern scoring method as an abomination, limiting successive serves as it does to two, when I play it’s always in sequences of five, with twenty-one points the line to aim for instead of (horror) eleven. There will be those who see a political animus in my use of the name of the game the Prime Minister used as Mayor of London (when promoting the Olympic Games there). But there will be those who see a political animus in anything.

I’m a peaceful chap myself. I merely wish to lather the ping-pong ball to my opponent’s destruction, to annihilate the enemy in a card-game, to blast a chess adversary off the edge of the board into the sea. Later today I shall be teaching a seven-year-old the elements of draughts, and I shall be delighted if he relishes capturing my pieces and begins to plan to do so. To pass on the intensity, the craft, the heartlessness to win – that’s the meaning of life.